With a background in computer animation, my relationship to the screen has been an intimate one. In my Filmscapes series, I extracted the single from the whole. When selecting frames as references for the paintings, I preferred to concentrate on my interpretation of the captured still, as opposed to the relevance of the frame within the original narrative. Splitting and duplicating the composition is one of the most interesting aspects of these paintings. While making the subject matter more dynamic, it also represents the passage of time, the subjective recollection of memories and more literally the film frames frozen between one and the next.

See the filmscapes series paintings in the Gallery

A pause for reflection.

Filmscapes is a body of work born out of how the artist is emotionally engaged with, and aesthetically informed by what she sees, her immediate landscape being replete with moving images and film. With a background in animation and computer graphics, Dudek’s relationship to the screen has always been an intimate one. Through the juxtaposition of personal memories and cinematic imagery, like a line running parallel between the narrative of the film and her own experiences, or literally running through the painting between its composite split, her paintings touch on several themes central to the experience of contemporary life. Firstly, our internal repository of memorable images is a composite of real and constructed, fact and fiction, and our emotional engagement with cinema and art influences us just as powerfully as real life. Secondly, memories tend to hinge on one central defining image, and are often static like a still, but on recollection no two are ever exactly the same, and how we remember things depends on how we are feeling.

Many of the works capture motion suspended: women running (M. escapes to dream, William in pursuit), couples falling (Fire and Ice), or poised before a kiss (Secreto, Saving Clementine). Just as the narrative of a film is conveyed through a sequence of moving images, these paintings are an exploration of how a single moment from the world of a film can resonate beyond that microcosm with your own personal and emotional history. There is something arresting about these filmscapes, pulled from the sequence of narrative and re-contextualised within the group of paintings. Just as memories are fluid and dynamic, these stills are not defining moments in the film but points at which things could progress either way, mid-action where the before and after is unknown.

The paintings possess qualities that go beyond the literal interpretation of a still to the themes they connect with: they give pause for reflection. Mirrors, doors, and windows are constantly recurring signifiers in her paintings; foreheads in the rear view mirror, eyes looking at you through the windscreen, faces looking out from the bathroom mirror caught in a moment of intimacy. Crucially these paintings are not two fragments of stills in sequence, but one that has been cut up and reconfigured according to the internal balance of the composition. Whilst this physically engages the viewer by drawing their eyes up and down between the two parts, which have a certain element of crossover but no actual repetition, it draws them back into the wider theme of memory as something fluid.

This is further developed in her larger pieces, diptychs, which tell the same story from different perspectives. In the aptly named ‘Nothing happens, twice’ the same scene is reconstructed from the masculine and the feminine perspective and set side by side, again engaging the viewer in a dialogue between the two and highlighting the subtle but impenetrable differences between them. A Hopperesque loneliness pervades the scene, punctuated by the empty mirror behind them, like a blank canvas, inviting you to place your own impression there. 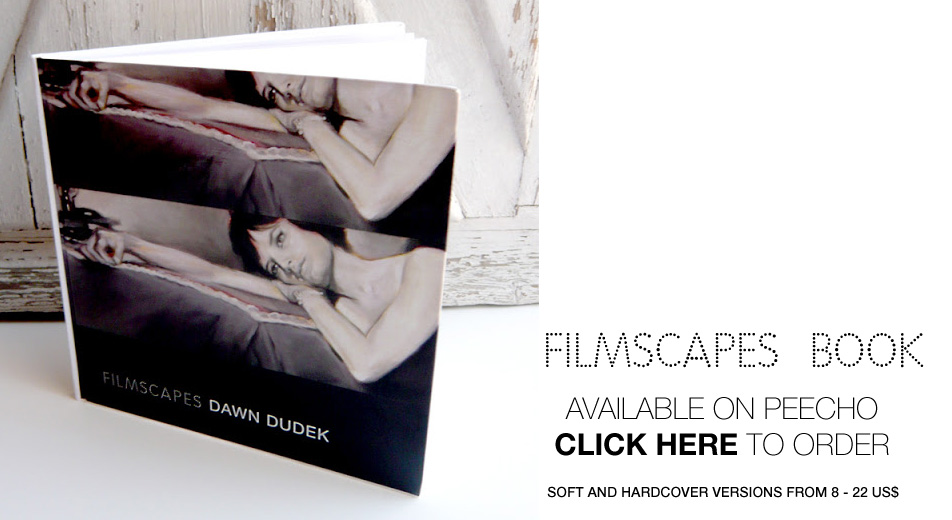